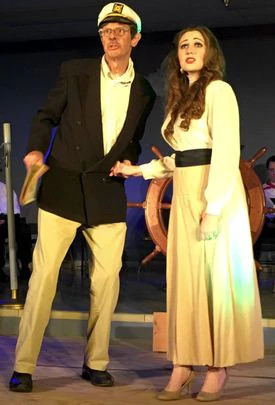 Like many operas, Francine Trester’s new North Shore-set “Keepers of the Light” does not have a happy ending.

The one-act chamber opera, which will receive its world premiere at the final concert of the 2019 Nahant Music Festival, adapts the true story of the Can Do, a pilot boat out of Gloucester that rushed into action to aid a Coast Guard boat in distress during the brutal Blizzard of 1978. Its five-man crew perished in the storm; ironically, the Coast Guard vessel made it to safety with no losses.

One of the men who lost his life that night was Donald Wilkinson Sr., the father of baritone and Nahant Music Festival founder Donald Wilkinson Jr. Trester learned about the Can Do when Wilkinson mentioned it offhand, she said while being interviewed in Somerville alongside first-year artistic director Eric Perry. She told Wilkinson that if he wasn’t uncomfortable with the idea, she thought it would make a terrific opera.

Moved, he said it would be an honor.

Trester didn’t want to set one note to music without Wilkinson’s approval, so she sent him a draft of her libretto based on Michael Tougias’s book “Ten Hours Until Dawn,” in which Wilkinson was quoted.

Tragically, Wilkinson never saw the opera come to life. In September of 2018, he died at the age of 57 from stomach cancer. But the Nahant Music Festival lives on, and according to Perry, its survival is greatly owed to Wilkinson’s enthusiasm for it.

The festival’s small board has had to adjust to the loss of its captain and work through unfamiliar challenges, explained Perry, a tenor who previously assisted Wilkinson as the festival’s executive director.

Wilkinson was by all accounts a man of many passions, and Perry sees this year’s festival as a tribute to his life. A longtime North Shore resident, Wilkinson left a promising career in electrical engineering to pursue singing full time. His primary musical home, said Perry, was Emmanuel Music, for which he auditioned at the age of 23; he also appeared as soloist with the Boston Symphony Orchestra on multiple occasions, and sang with the Handel and Haydn Society and the Boston Camerata. He was also an avid birder, and a collector of “I Love Lucy” and “Wizard of Oz” memorabilia.

“He was an angel sent down to earth,” Camerata music director emeritus Joel Cohen described Wilkinson over the phone. People wanted to give their best for him, he said. “I don’t think he had an enemy in the world. Everybody is struggling for little crumbs in the music business, but — everybody loved him! And that’s because he was a fine person.”

Since its inception in 2014, the festival has included an apprenticeship program for rising vocalists, which is now named after Wilkinson. The apprentices are mostly working in the industry or have finished a master’s program within the last few years, said Perry. In the spirit of welcoming singers who, like Wilkinson, may have started their careers later, there is no upper age limit.

Though this rebuilding year includes fewer events than past seasons, this year marks the first in which the festival has been able to provide the vocal apprentices with an honorarium in addition to room and board, Perry said. “Because the apprentice program is now in Don’s name . . . we want to honor Don’s legacy by also respecting the work and the time that our artists give.”

In programming past festivals, Wilkinson drew on both the time-tested and the new. Baroque music was a regular fixture; even suffering from late-stage cancer, he conducted a program of Bach cantatas last year. He also made a point of commissioning new pieces. Trester in particular has a long association with the festival, having composed a song cycle and an opera for it already.

In one of their final communications before his passing, Perry says, he and Wilkinson agreed on the 2019 festival’s repertoire. On June 9 at St. John’s Episcopal Church in Gloucester, the apprentices will perform the St. Mark Passion by Reinhard Keiser, a contemporary of Bach. Then, on June 15, they’ll deliver the world premiere of “Keepers of the Light,” stage directed by Joshua Major and music directed by Timothy Steele, at the Nahant Town Hall. The program also includes an “opera to Broadway” selection of songs about the sea. Supplementing that, “Ten Hours Until Dawn” author Tougias will give a free talk on June 11.

The music of the half-hour opera weaves in a seagull motif — a tribute to Wilkinson’s birding as well as an anecdote from Tougias’s book — and a setting of Tennyson’s “Crossing the Bar.” Language, Trester says, greatly influences her music. “I want the words to sing,” she explains.

The ultimate fate of the Can Do is not explicitly revealed in the libretto. It ends with the crew making the decision to go out and aid the Coast Guard vessel, knowing the danger.

“If you know what happens, it’s very dark,” says Trester. “But . . . the light is the fact that there are people who are willing to do things like this.”

In Gloucester and Nahant, June 9, 11, and 15 . www.nahantmusicfestival.org

Zoë Madonna can be reached at zoe.madonna@globe.com. Follow her on Twitter @knitandlisten. Madonna’s work is supported by the Rubin Institute for Music Criticism, San Francisco Conservatory of Music, and Ann and Gordon Getty Foundation.